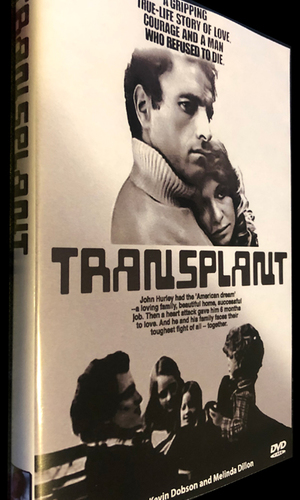 Transplant is based on a true story. John Hurley (Kevin Dobson) is street‐tough Irish‐Catholic who has risen from a Brooklyn tenement to job with his name on the door. He lives in relative comfort in suburbia with wife, three children and a car. John smokes cigarettes heavily and is overly fond of cold bone‐dry martinis. His job is high‐pressure and he loves it that way, explaining, "I couldn't keep my head on without it." At the age of 35, John has a massive heart attack. His doctor is pessimistic, The family is told to gather at the hospital. A priest administers last rites. Slowly, however, John pulls out of it. But when his doctor advises him to quit his job, he balks, pushing himself toward a sem blance of recovery and rushing back to work. John Gay's script is forced to maneuver between the personal story of John Hurley and innumerable objective facts about heart attacks and transplants.