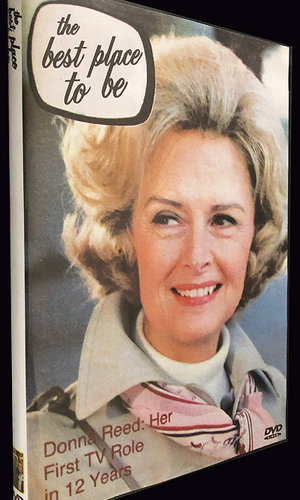 This attenuated adaptation of Helen Van Slyke's novel stars Donna Reed (her first TV appearance in 12 years) as a widow with financial and domestic problems. Her adult daughter Stephanie Zimbalist has turned to drugs; her sons Michael Shannon and Tim Hutton have less severe but no less time-consuming personal difficulties; and her mother Mildred Dunnock is aloof and remonstrative. In addition, Reed is torn between two loves: old flame Efrem Zimbalist Jr., and doctor John Phillip Law, who is young enough to be her son. The above-mentioned plot contrivances would seem to be sufficient to fill the four hours (and two parts) of The Best Place to Be several times over; still, there's time enough left over for a tragedy to strike Reed's family before she finally settles down with the elder Zimbalist.