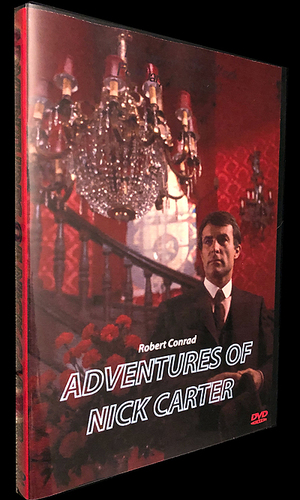 Created for the "dime novels" in 1886, scientific detective Nick Carter has been transferred to film and radio several times in the past six decades, though most of these projects have tended to update his adventures. 1972's made-for-TV Adventures of Nick Carter restores the "turn of the century" surroundings of the original stories. Robert Conrad (somewhat older than his literary counterpart) portrays Nick Carter, a New York private investigator hired to locate the missing wife of a wealthy "robber baron" playboy. He also devotes some time to locating the murderer of a close friend. Though hampered by a tight budget, the film does a nice job recreating a 19th century world of crooked cops, graft-greedy politicians, all-powerful plutocrats, raggedy paper boys and Lower East Side lowlifes. Adventures of Nick Carter was one of three pilots for a projected "rotating" series of TV detective shows based on famed literary sleuths; the other two series in this aborted project were to have spotlighted the adventures of Sherlock Holmes and Hildegarde Withers.