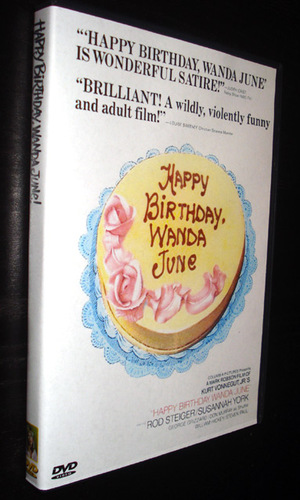 Based on a play by Kurt Vonnegut, Jr., Happy Birthday, Wanda June takes us to the Ryan household, where Penelope Ryan (Susannah York) has learned to accept the death of her husband Harold, a supremely macho explorer and big game hunter who married her when she was working as a carhop. He disappeared in the jungles of the Amazon eight years ago and has never returned; as one character puts it, "Not even Mutual of Omaha believes he's alive anymore." Since then, Penelope has becomes educated, independent, and engaged to Norbert Woodley (George Grizzard), a doctor. Only Paul (Steven Paul), Harold's son, still believes that his father might still be alive. While Kurt Vonnegut Jr. was vocally unhappy with this adaptation of his play, it's actually quite accurate to its source and features several fine performances, especially William Hickey, reprising his stage role as Harold's sidekick, Looseleaf Harper.