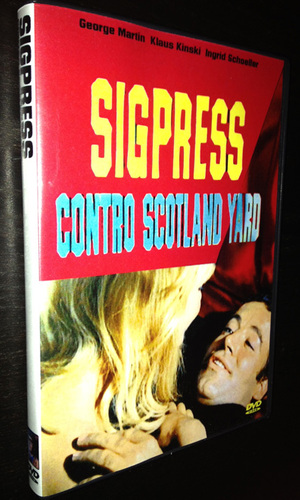 This offbeat crime comedy is most flippant and parodic when it focuses on the hero, a gentleman-thief-master of disguise named Sigpress (George Martin), and the almost Clouseau-like Inspector of Scotland Yard who is always one step behind him. The actual crime plot is surprisingly grim and ends with several deaths, including some of innocent people. The hero also has extra springy gymnastic abilities, which make for some unusual fight scenes. The female cast is exceptionally attractive: Sophia Loren look-a-like Gloria Paul has just one scene, a show-stopping musical number, and Orchidea De Santis appears in an equally show-stopping bikini. The original music score by Gino Peguri is somewhat repetitious but extremely catchy. Includes the original theatrical trailer!