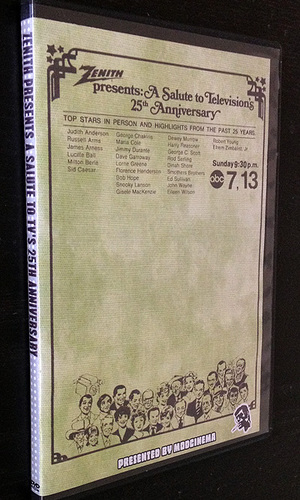 On September 10, 1972, back when a single sponsor was responsible for a complete TV show, Zenith presented an all star look back at the first 25 years of network television. This retrospect brought back many of the great names of early television (most of whom are no longer with us) and revisited those days through film clips, old kinescopes and memories of those who were a part of this rich entertainment history. Stars include Lucille Ball, Milton Berle, Sid Caesar, Jimmy Durante, Flornce Henderson, Bob Hope, George C Scott, Dinah Shore, Smothers Brothers, Ed Sullivan, John Wayne, and many many more. Includes original broadcast commercials from 1972!