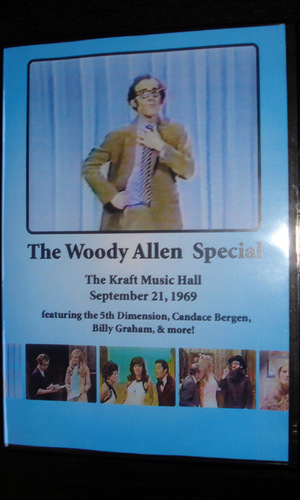 The Woody Allen Special aired on September 21, 1969 - which was part of TV series called The Kraft Music Hall. (the music guest for this episode was the 5th Dimension). Candice Bergen, best known for her role as Murphy Brown is Woody's special guest. And - oh my - what a treat - Reverend Billy Graham has a terrific interview with Woody Allen as they discuss God, sex and seeing each other's show. Billy says he'll go see Play it Again Sam if Woody goes to one of Billy Graham's revivals. It's an amazing bit of television history -and fascinating given the events that followed the era of the sexual revolution of the late 1960's.