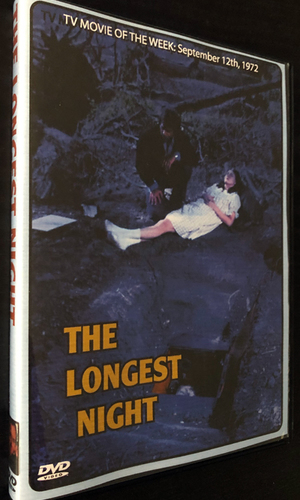 The Longest Night is a harrowing made-for-TV movie based on a real-life kidnapping. Karen Chambers (Sallie Shockley) is abducted from the home of her parents (David Janssen & Phyllis Thaxter) and held for ransom. Her captors (James Farentino & Skye Aubrey) entomb her in a homemade coffin buried several feet underground, with an air hose as her only conduit to the outside world. As the police close in on the kidnappers and search for the girl, she desperately tries to stave off hysteria and to prevent the cutting off of her air supply. This movie (rumored to be a favorite of filmmaker Quentin Tarantino) was originally shown as an ABC Movie of the Week on September 12, 1972.