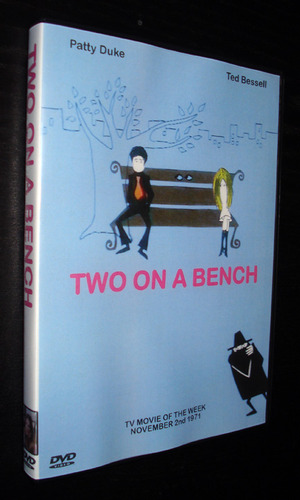 Long ago and far away, Patty Duke occasionally played hippie types. One can get a glimpse of Duke's "far out" period in the 1972 TV movie Two on a Bench. Psychedelic Patty finds herself eyeball to eyeball with uptight square Ted Bessell when each suspects the other of working for a notorious spy. The supporting cast includes Alice Ghostley as Duke's klepto mom, John Astin (Duke's future husband) as a psychiatrist, and Jeannie Berlin (Elaine May's daughter) in a comedy vignette. Filmed in Boston, Two on a Bench is a surprising misfire from the otherwise dependable writing team of Richard Levinson and William Link.