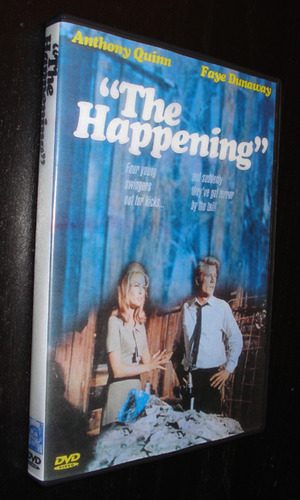 A group of young drifters (Faye Dunaway, Michael Parks, George Maharis, and Robert Walker Jr.) kidnap wealthy businessman Roc Delmonico (Anthony Quinn) just for kicks. They keep him captive, demanding a ransom for his safe release. However there is no one - wife, Mafia associates or mother - willing to part with the $200,000 ransom. Demonico is dismayed that no one appears unduly concerned about his fate and joins forces with the kidnappers to plot his revenge, blackmailing his once nearest and dearest into parting with $3,000,000 in hush money. The theme song from The Happening proved to be a major hit for Diana Ross & the Supremes -- in fact, a much bigger hit than the movie itself.