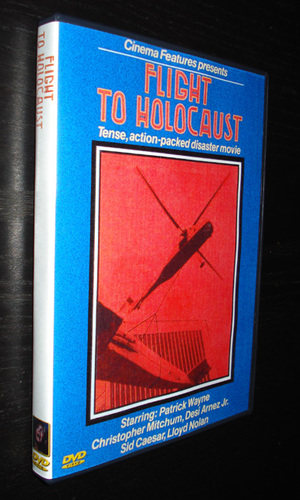 Though not readily apparent, Flight to Holocaust is the feature-length pilot film for a potential TV series. Crashing into the side of a high-rise building, an airplane is precariously wedged in the structure's 20th floor. Dispatched to rescue the survivors are a team of acrobatic troubleshooters, played by female circus performer Fawne Harriman and combat veterans Chris Mitchum, Patrick Wayne, Desi Arnaz Jr. and Paul Williams. As can be gathered by a perusal of the cast list, the film's gimmick was the presence of three second-generation Hollywood stars. After the initial telecast of Flight to Holocaust on March 27, 1977, NBC invited viewers to mail in their opinions of the film. Evidently the verdict was unanimous, since no weekly series resulted.