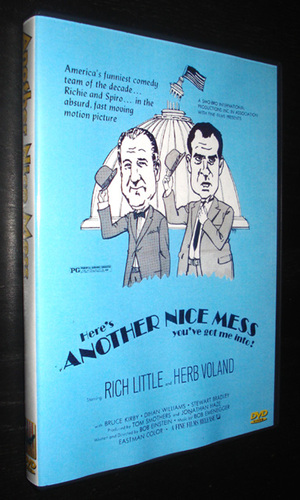 Two bumbling friends, Richie, who is President of the United States, and Spiro, who is his Vice-President, become involved in a series of misadventures in Washington, D.C. While Richie deals with peace demonstrations and other tribulations of his presidency, Spiro lusts after his secretary. As the two men men watch the television program ABC Wide World of Sports, they get high eating cookies laced with marijuana. Meanwhile, an elderly, Hawaiian-shirt wearing Adolf Hitler disguises himself as a mailbox and is killed when someone throws a bomb inside. The film is presented in the style of a Laurel and Hardy comedy, with Nixon in the Oliver Hardy role, and Agnew in the Stan Laurel role. Another Nice Mess was film written and directed by Bob Einstein.