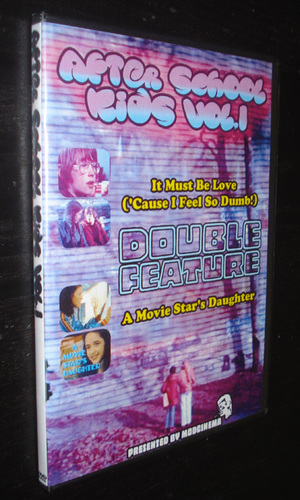 It Must Be Love ('Cause I Feel So Dumb!) 1975, 30 mins, dir. Arthur Barron
Season four of the ABC Afterschool Special series gets under way with this sensitive, and sometimes hilarious, story of puppy love. Alfred Lutter (Alice Doesn't Live Here Anymore) stars as Eric, a moony-eyed 13-year-old who develops a crush on Lisa (Vicki Dawson), a popular and somewhat stuck-up cheerleader. Eric spends most of the story trying all manner of methods (from spray-painting to dancing the "bump") in hopes of impressing the girl -- or, at least, to get her to notice him. Alas, our hero fails to utilize the most effective strategy of all: simply to be himself. And, of course, he also fails to notice that there's another girl in school who has been the "right one" all along! 16mm transfer. WATCH CLIP

A Movie Star's Daughter 1979, 46 mins, dir. Robert Fuest
A very young Trini Alvarado stars in this touching and sometimes amusing ABC Afterschool Special. The new kid in her high school, Dena McKain (Alvarado) is initially shunned by her classmates. Suddenly, however, she becomes the most popular kid in school and is showered with attention. Any other girl would be thrilled by this metamorphosis, but a wary Dena has been through all this before: It seems that the kids have just discovered that Dena's dad is the famous movie star Hal McKain (Frank Converse). This time around, will our heroine find out who her true friends are, or is she in for another crushing disappointment? WATCH CLIP