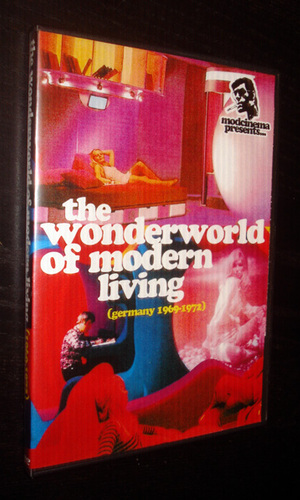 6 documentaries originally broadcast on German television from 1969-1972, available on DVD with English subtitles for the very first time anywhere!

RUTH 91-61-91 ("A Report From The Model World") 1969, 30 mins, Color, English subtitles
From high fashion to catalogue shoots, this documentary explores the ins and outs of the German fashion world in the late sixties. From London to Duesselfdorf, you'll follow 21 year-old model Ruth Koecher and meet several others along the way who talk candidly about their love lives, money, and ambitions. This 30 minute docuemtnary original aired on German television on June 8th 1969.

JUNG UM JEDEN PREIS ("Young at Any Price: The Youth Cult") 1972, 28 mins, Color, English subtitles
This documentary investigates 1970's German youth, viewed as "highly fascinating phenomenon of our times." In 1972, being young has set a standard for social prestige and a new philosophy for life. Modern science races to create revitalizing drugs as men and women's fashions & advertising underline a slim, youthful appearance. You'll explore hippie fashion boutiques, modern hairstyle salons, and institutions that thrive on the fear of getting old created by society as "Attractiveness, beauty and youth" become the thing of today!

KONZERNE, KETTEN, KONSUMENTEN ("Corporations, Chains, Consumers") 1971, 30 mins, Color, English subtitles
Documentary centering around the Karstadt mall in Hamburg which creates huge profits and a "glimpse of the future" of shopping. Explore how advertisers reach consumers with a deep psychological strategy to increase sales in their department stores. See the dream kitchen of the future that explores colours, shapes, and technology and a prototype of an urban department store planned to be "a shopping paradise of a cosmopolitan city at the dawn of the 1970's."

DIE BLUMENKINDER: HIPPIES IN LONDON ("The Flower Children") 1968, 30 mins, B&W, English subtitles
This 1968 TV programme documents England's flower children who are in the middle of leaving their best-known playgrounds (Carnaby Street and Kings Road boutiques) and moving towards London's underground. Explore the "hippie moviement" who use stupefactive drugs against boring everyday life in a bourgeois society. Attend the VIP premiere of the Beatles Apple Boutique, art gallery openings, and psychedelic lightshows that smash the confines of the society set.

COMPUTER, MENSCHEN UND BERUFE ("Computers, People and Jobs") 1968, 45 mins, B&W, English subtitles
1968 documentary on the Computer-controlled mechanical wonders that would soon change the lives of those around the world. This programme explains how computers work, and how they are making us a more independent society through automation. Explore the newspaper business, printing world, data processing departments, schools, and IBM teaching centers, all of whom are moving forward towards advanced technological progress.

VERUSCHKA: PORTRAIT EINES STARMODELLS ("Portrait of a Supermodel") 1969, 27 mins, B&W, No subtitles
Of all the players in Michelangelo Antonioni's cult 1966 film Blow-Up, there was one legendary enough to star as herself. Veruschka, the model whose farout features dominated fashion magazines in the late '60s appeared for hardly five minutes, but her performance was electrifying. This programme documents a day spent Veruschka in 1969 at a fashion shoot in Germany.