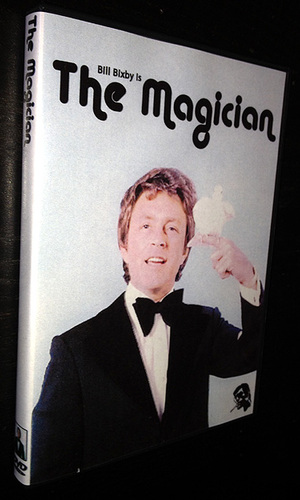 This TV movie stars Bill Bixby as a professional magician who is wrongly accused of a crime and sent to prison. Upon his release, Bixby swears to fight criminals and wrongdoers and to champion the underdog, using his prestidigitory skills to accomplish this. The film proudly states in its prologue that all the illusions seen during the story are actual magic tricks, minus special camera effects--though it strains credibility to assume that Bixby carries a prop for every occasion to confound the crooks at a moment's notice. The Magician was transformed into a weekly 60-minute series in the fall of 1973. The series lasted only one season, the victim of executive indecision over whether to play the series straight or with tongue in cheek.

This disc contains two episodes "Pilot" (#1.0) A magician is asked by the mother of a plane-crash victim to check into a possible conspiracy; he discovers that the plane crash was staged. (Original air date: March 17th, 1973.) "The Manhunters" (#1.1) Tony investigates an illegal casino operation after an attempt is made on Max's life and clues point to the operation, which Max is scheduled to testify about. Guest starring Marlyn Mason and Scott Walker. (Original air date: October 2, 1973)