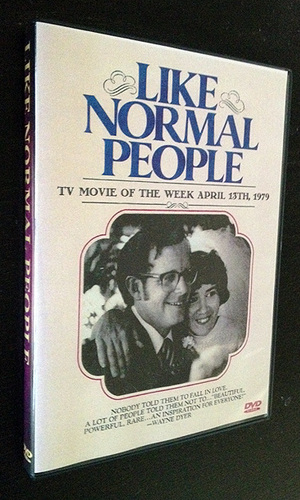 Based on a true story, the made-for-TV Like Normal People IS the story of a romance between two mentally challenged adults. In his first dramatic acting appearance, Shaun Cassidy plays Roger Meyers, a mildly retarded man who, while living in a home for the handicapped, falls in love with another resident, Virginia Rae Hensler (Linda Purl). Despite the fierce opposition of their parents--not to mention one of the administrators, who regards such a union as "a social obscenity"--Roger and Virginia are determined not only to marry, but to raise a family. Virtually their only ally is teacher Bill Stein (Zalman King), who formulates a stringent training program to show the couple the obstacles that they will face, and must overcome, in their future lives. Like Normal People made its ABC debut on April 13, 1979, a scant three weeks after the broadcast of the similarly themed No Other Love.