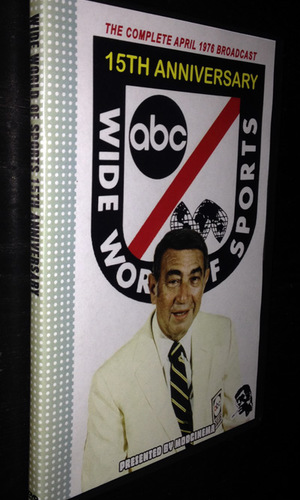 When ABC's Wide World of Sports host Jim McKay set out to travel to the various locations from which several of the segments of the 15th Anniversary "Wide World" retrospective program was introduced, it meant journeying thousands of miles in one day. With that kind of schedule, it wasn't possible to rely on the standard carriers' fixed schedules, so McKay, with director Larry Kamm and an ABC Sports crew, secured the use of a Lear Jet to take them on their journey from one coast to another. And it wasn't just any Lear Jet that took them there. This one belonged to recording star John Denver, and it was piloted by Denver's father, "Dutch" Deutchendorf (Denver's real name).

The odyssey began when the crew arrived in the jet at a private airstrip in New Jersey to pick up McKay, and then they were off. From Cleveland, Ohio to re-cap the winning performance by figure skater Peggy Fleming in the U.S. National Championship, to Twin Falls Idaho where motorcycle daredevil Evel Knievel made his memorable skycycle jump attempt over the Canyon, to the L.A. Sports Arena where Jim Beatty ran the first sub-four minute mile indoors. Watch this historical broadcast and gold star technical achievement as ABC's Wide World of Sports celebrates it's 15th anniversary. Includes the original broadcast commercials from 1976!