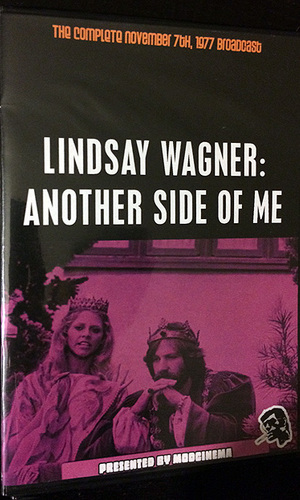 This ABC comedy/variety special features host Lindsay Wagner (television's "Bionic Woman") sharing her "feelings, fantasies, and friends" as she performs in sketches about her romantic, comical, and musical dreams. Wagner is joined by husband Michael Brandon and guests Paul Anka, Vincent Price, Avery Schreiber, Vito Scotti, Teddy Wilson, the Meraquas Synchronized Swim Team, and the Locke High School Band. Though there are a lot of silly jokes and a collection of outtakes over the end credits, this 1977 television special is on the whole less cheesy and cringe-worthy than such early seventies David Winters productions as Raquel! or The Special London Bridge Special. Wagner gets to strut her stuff and show us what's she's made off and has a beautiful singing voice. From here she would go on to reign as queen of television movies in the US while Michael Brandon got a shave and found love with his Dempsey and Makepiece co-star Glyness Barber.