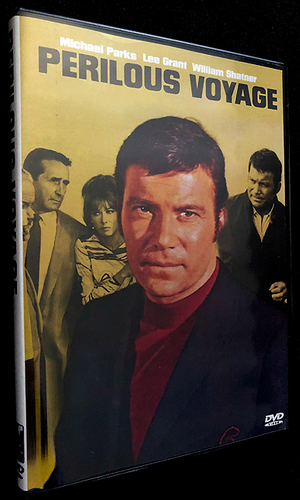 Perilous Voyage (originally titled The Revolution of Antonio DeLeon) is a TV movie starring Michael Parks, Lee Grant, and William Shatner. Although filmed in 1968 (during the hiatus between Star Trek's second and third seasons), Perilous Voyage was not actually shown until eight years later in 1976, when it was finally broadcast by NBC. The plot concerns Antonio DeLeon (Michael Parks), a revolutionary leader in the fictional South American country of San Cristobal. He and his band of followers are determined to remove their country's new government by force, instead of installing the wanted DeLeon as its leader. It turns out Monroe's an arms smuggler, with the Morelia actually carrying a shipment of arms to fuel another separate revolution in Ecuador. Will these arms fall into the hands of DeLeon? Will the passengers manage to take back the ship? Or will DeLeon succeed in launching his revolution?