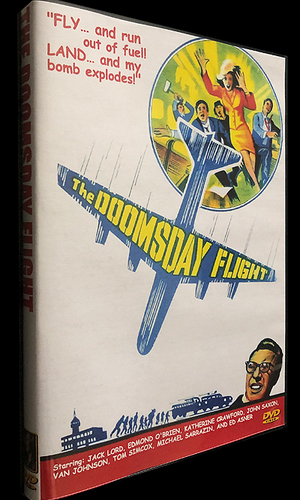 In this made-for-TV movie, a deadly bomb is concealed aboard a passenger jet in a devious plan to blackmail the airline company. With the bomb threatening to go off any minute, the passengers and crew aboard the plane must search to find and dismantle the deadly device. This early made-for-TV movie only received one NBC network airing as opposed to the usual two. The network shied away as it was thought that it was too detailed and could serve as a textbook for airplane terrorism. The all-star cast includes Jack Lord, Edmond O'Brien, Katherine Crawford, John Saxon, Van Johnson, Tom Simcox, Michael Sarrazin, and Ed Asner.