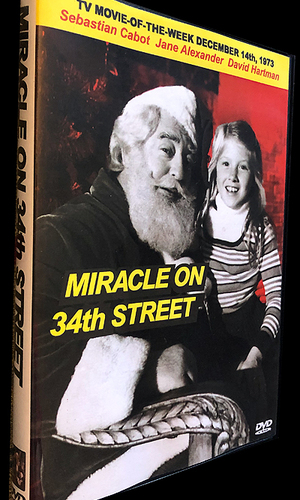 The 1947 film comedy Miracle on 34th Street starred Edmund Gwenn as a bearded gentleman named Kris Kringle, who was convinced that he was the genuine Santa Claus. The earlier Miracle was good enough as it stood, so why remake it? Still, the full-color 1973 Miracle on 34th Street has the considerable advantage of Sebastian Cabot, his trademarked beard dyed snowy white, as Kringle, so it isn't as bad as expected. The story, which involves the commercial and legal ramifications of the "real" Santa taking a job as a department store Santa at Macy's, was barely updated for the 1970s, meaning that several of the plot devices--including a nasty psychiatrist who has Kringle committed--were somewhat anachronistic. The uplifting final scene, wherein a cynical little girl becomes a true believer of Santa Claus (as do the adults in the story), still works well in the remake, even though Suzanne Davidson isn't in the same league as the original Miracle's Natalie Wood. The TV-movie version of Miracle on 34th Street wasn't too successful, but that didn't stop John Hughes from churning out a second remake in 1994.