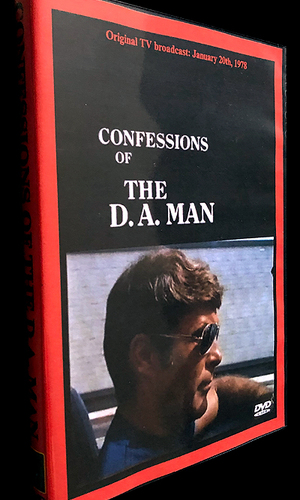 The so-called feature film Confessions of the D.A. Man actually consists of two episodes from two different TV series. The plotline concerns a dangerous campus radical (John David Carson), who may go free if the DA's office can't locate any witnesses for the prosecution. The first portion of the story, detailing the arrest of the villain, was first seen on the October 6, 1971 telecast of Adam 12. The second half, in which DA Paul Ryan (Robert Conrad) struggles to build a case against Carson, is derived from the October 8, 1971 installment of The DA. Produced by Jack Webb, both of these "crossover" TV episodes feature Martin Milner and Kent McCord as officers Pete Malloy and Jim Reed.