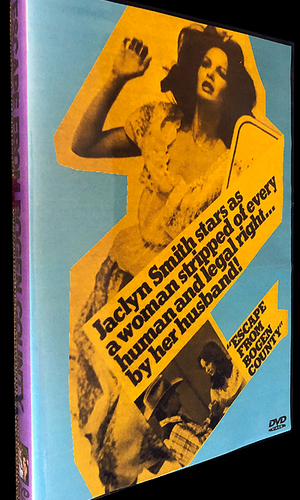 A Southern big shot (Mitch Ryan) runs his local community like a personal fiefdom. His despotism extends to his abusive marriage to Maggie (Jaclyn Smith). Denied her basic rights as a woman and a human being, Maggie tries to file for divorce, only to run up against a corrupt, good-ole-boy legal system. Her only recourse is to escape from Bogen County without attracting the attention of the paid-off police force. The film's feminist trappings do not entirely compensate for the exploitational nature of the script. Made-for-TV, Escape from Bogen County first aired October 7, 1977.