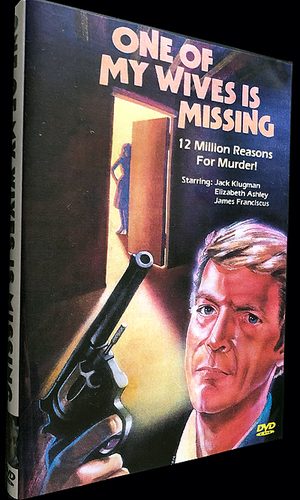 Vacationing in a small town (actually Lake Arrowhead, California), a frantic James Franciscus shows up at the local police station, declaring that his wife has disappeared. Franciscus imperiously demands that easygoing police inspector Jack Klugman drop everything and find his missing spouse. Within a few days, a woman claiming to be the wife shows up-but Franciscus insists that he's never met the woman before. What's going on here, and why does Klugman seem so calm and collected. First telecast March 5, 1976, One of My Wives is Missing was based on the Robert Thomas novel Trap for a Single Man. The book had previously been filmed for TV in 1970 as Honeymoon with a Stranger, and would be remade in 1984 as Vanishing Act. One would think that, with three versions of the Thomas story floating about, virtually everyone in the audience would be privy to that clever twist ending.