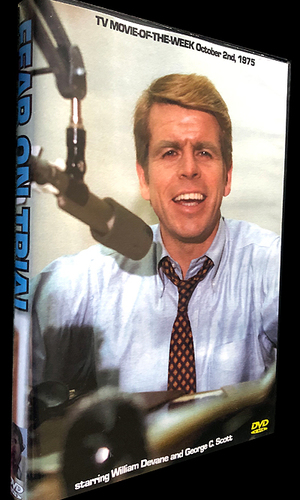 William Devane stars as John Henry Faulk, a popular radio and TV entertainer of the 1950s. In 1956, Faulk is blacklisted on the basis of an attack from the self-appointed anticommunist group AWARE. Fired by CBS, Faulk decides to sue AWARE for libel. His attorney Louis Nizer (George C. Scott) warns him that such a case will take several years to get to court, thus Faulk reluctantly takes a series of low-paying jobs to sustain himself during his "down period". In 1962, the case is finally brought before a judge, with several witnesses pointing out the idiotic iniquities of the Blacklist mentality (one child actor was prohibited from working because he had a name that sounded like that of an adult blacklistee). Appearing as themselves during the courtroom scenes are actress Kim Hunter, herself a blacklist victim, and producers David Susskind and Mark Goodson. Faulk wins his case, though his original award of $3.5 million in damages is later reduced to $550,000, and he is never able to completely return to his pre-blacklist prominence. Like several other filmic recreations of the "witch-hunt" era, Fear on Trial was first presented in the mid-1970s (October 2, 1975, to be exact), long after the most zealous of the 1950s anti-Red groups had fallen by the wayside. The film earned an Emmy award for screenwriter David Rintels.