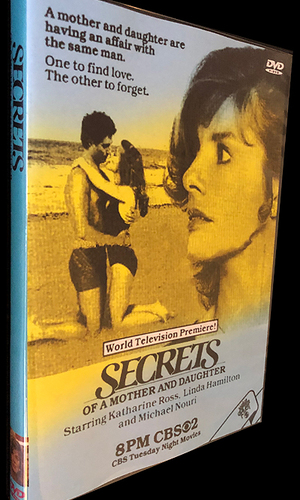 A widowed mother, Ava Pryce (Katharine Ross) and daughter Susan Decker (Linda Hamilton) clash over the same man, the owner of a West Coast restaurant Alex Shepherd (Michael Nouri) -- Ava is still painfully adjusting to her new role of widow. Once a Hollywood starlet, she had been married to a fabulously successful corporation lawyer. Meanwhile, Susan is having marriage problems and decides to move in with mom at the family's beach house in Malibu. Alex is immediately smitten by Ava and begins talking about a serious relationship. They go to bed together but she remains withdrawn, presumably because of the death of her husband. Easily puzzled, Alex turns for consolation to a more than willing student. Through a series of plotting machinations, he does not know that she is Ava's daughter and she does not know that he is her mother's lover. So we are left with mommy and her kid, having their own problems with each other, bedding down with the same man.