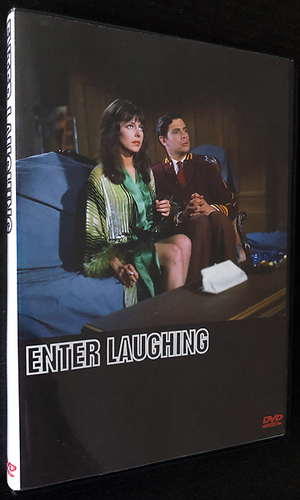 New transfer! Carl Reiner's semi-autobiographical novel Enter Laughing makes a largely successful transition to the screen. Reni Santoni plays the Reiner character, here named David Kolowitz. A machinist's apprentice in Depression-era New York, David dreams of becoming the new Ronald Colman. Defying the wishes of his parents (Shelley Winters, David Opatoshu), David lands a nonpaying job in a seedy theatrical production directed by broken-down ham Marlowe (Jose Ferrer). That the young aspiring actor knows nothing about his "craft" is evident the moment he speaks his first stage direction--"Enter Laughing"--as if it were a line of dialogue. Helped along by Marlowe's sex-starved daughter Angela (Elaine May), David manages to survive the rehearsal period, but his first public performance threatens to become a disaster when he can't find the entrance to the set. Still and all, David makes it through the play, cheered along by his now-supportive parents. Blessed with a marvelous supporting cast--including Jack Gilford, Don Rickles, Janet Margolin and veteran black comedian Mantan Moreland--Enter Laughing is a riot, especially for those viewers who have ever participated in amateur theatricals themselves. Watch for Rob Reiner in his film debut as a clumsy, self-conscious actor.