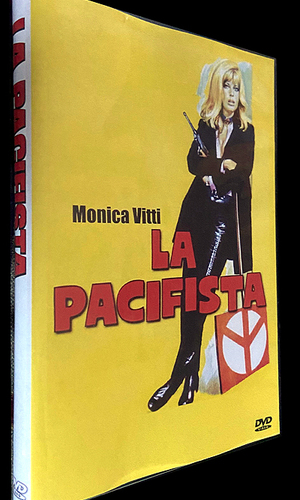 This highly symbolic and enigmatic political drama by Hungarian director Miklos Jancso was produced by a consortium from Italy, France and West Germany. This film is considered to be an homage to Antonioni as it uses his favorite leading actress (Monica Vitti) and his cameraman Carlo di Palma. This film was made during a time when Jancso was not allowed to make films in his native Hungary. In the middle of the crowd, while covering an Italian political protest by leftists, The Journalist (Monica Vitti), a pacifist, finds herself surrounded by a quite different group of people who jostle her, remove her recording equipment from her and set her car on fire. She complains to the police about this. However, when the police bring one of the young men before her for her to identify him, she says he is not one of her attackers. This leads to her having a romantic relationship with the young man. The group, and the young man, are young Italian neo-fascists, and the young man has been given the job of assassinating a leftist. He is too gentle to do this, and his group kills him right before The Journalist's eyes. She goes to the police again, but they begin to believe that she is insane, even when she is forced to kill her boyfriend's assailants right there in the police station. She is formally declared mad, and is taken off.