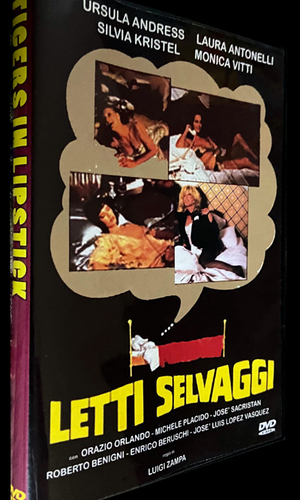 In this standard but toned-down sex comedy, seven different vignettes starring female leads like Monica Vitti, Ursula Andress, Laura Antonelli, and Sylvia Kristel portray various questionable exploits headed by women with minds of their own. Antonelli, for example, plays a dynamic businesswoman who picks up a young orchestra conductor and both yearn to spend some quality time together -- but to no avail. As the patient conductor follows her around like a footnote on a text, she continues to finish up dealings with other businessmen, lawyers, and various agents while her romantic interlude seems to be left cooling on the back burner somewhere. In another vignette, Monica Vitti and Michele Placido are in competition (and disguises), trying to con the pricey necklace off an unsuspecting woman at a casino. Other vignettes involve some nudity, but viewers looking for X-rated material will have to look elsewhere -- this sex comedy has more emphasis on the comedic than the lustful side of life.