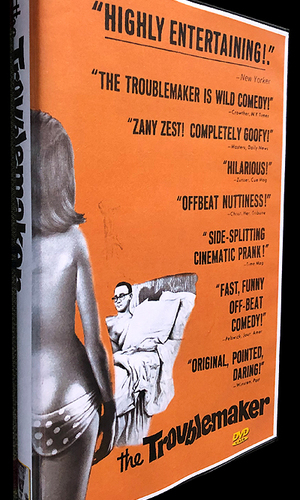 A midwestern hayseed (Tom Aldredge) takes on the Big Apple in this comedy. He goes because he is tired of running a chicken farm and thinks it might be more fun to own a coffee house. But before he can, he must deal with a myriad of crooked city bureaucrats (James Frawley) who won't issue the necessary license until he pays them off. The comedy and trouble begin because, he refuses to do it. Still, thanks to his more worldly friend, an attorney who secretly pays the crooks (Buck Henry), the hayseed gets his coffeehouse. He is so vocal about his moral outrage, that the officials involved decide they must abduct him and hide him away in a looney bin to keep him quiet. Unfortunately for them, it takes more than an asylum to stop the stubborn young man from destroying their careers. The humor in the film is largely improvisational and this is no surprise as it is based on the comedy of "The Premise" a Greenwich Village-based comedy troupe.