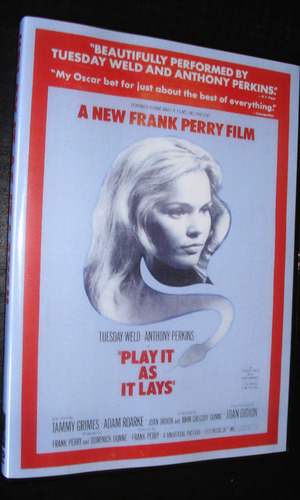 Play It As It Lays offers what is probably the harshest view of Hollywood to be given a major production up to the time of its release; it depicts a world of narcissistic egotists who will do anything to inflate their own sense of importance. Based on the novel by Joan Didion, it tells of the rise and fall of one woman's acting career. Maria Wyeth (Tuesday Weld), a model, began her acting career in a Warhol-like film, and moved "up" to perform in a biker film. The director of both films, Carter Lang (Adam Roarke), discovered her, and soon afterwards, marries her. As Carter's career moves ahead, he pays less and less attention to Maria. She has a number of affairs to try to brighten her world, but nothing much works. When she gets pregnant by one of them, Lang divorces her. Then, her best friend (Anthony Perkins), who tried to bring about a reconciliation between Lang and her, commits suicide. Her world in tatters, she has a nervous breakdown. The film's story is told in flashbacks while she is in recovery.