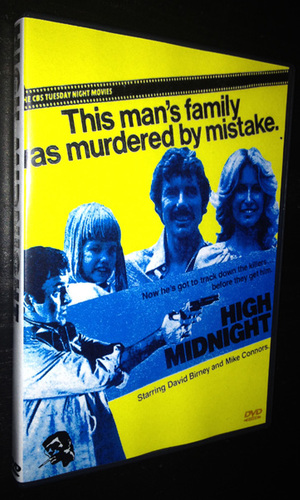 Though tenuously based on fact, High Midnight is the sort of TV movie that could only have been made in the fuzzy-headed 70's. David Birney is a blue-collar type whose wife and daughter are killed in a no-knock drug bust. Nasty narcotics officer Michael Connors refuses to admit that he's made a mistake. Connors tries to cover up his own ineptitude, and eventually targets Birney for elimination. With the help of sympathetic cop Christine Belford, Birney avenges his family's murder. It's not likely that a TV movie in which a narcotics cop is the villain will get much play in the 1990's, but High Midnight is a nonetheless fascinating time capsule.