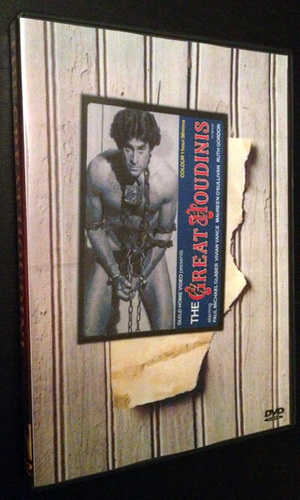 Made for television, The Great Houdini tells the life story of famed American illusionist/escape-artist Harry Houdini and his wife Bess. Studiously avoiding covering the same ground as the 1953 Houdini theatrical-film biopic, director Mel Shavelson's script for Great Houdinis spends a great deal of time on the conflict between Harry's Catholic wife Bess and his Jewish mother. The spiritualism angle so important to the Houdini story allows the 1976 film to recreate Houdini's meetings with "true believer" Sir Arthur Conan Doyle. Again departing from the 1953 Houdini, this later film does not end with Houdini's death from peritonitis in 1926; instead, we watch as the widowed Bess desperately tries to make contact with her husband in the "other world," all the while debunking phony mediums, just as her husband had done. Paul Michael Glaser and Sally Struthers star as the Houdinis, with Ruth Gordon as Harry's mother Mrs. Weiss, Peter Cushing as Conan Doyle, Jack Carter as Houdini's brother, Adrienne Barbeau as his mistress, Nina Foch as a medium, and Vivian Vance as the all-around best friend/severest critic, who narrates the film. The Great Houdini first aired on October 8, 1976.