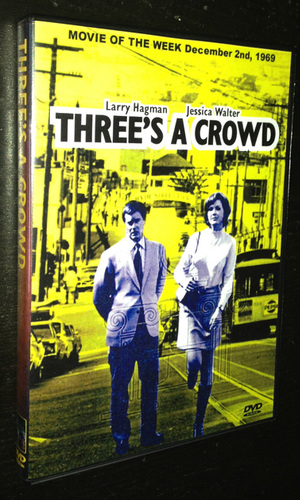 For some reason, the made-for-TV Three's a Crowd was rerun to death in the early 1970's. Perhaps it's because local TV station managers couldn't get ahold of the 1940 theatrical features My Favorite Wife or Too Many Husbands, the plotlines of which are strikingly similar to Three's a Crowd. Larry Hagman plays a pilot who disappears and is presumed dead by his wife. Seven years later, however, Hagman pops up in another city, married to someone else. Jessica Parker and E. J. Peaker costar as the pilot's two brides. The film's title tune was written by Bobby Hart and Tommy Boyce, the same team responsible for several of the Monkees' 1960's hits. Three's a Crowd debuted December 2, 1969.