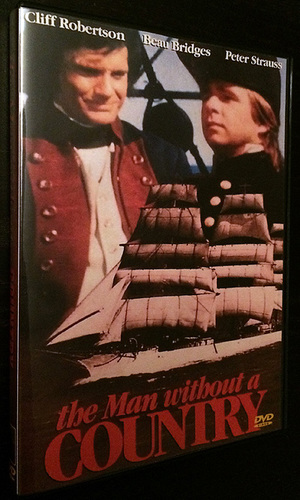 Though previously filmed several times in one- and two-reel form, Edward Everett Hale's classic 1863 novel The Man Without a Country was not given a full-length treatment until this ABC "Kodak Special" TV presentation. Cliff Robertson stars as young, zealously patriotic American military officer Philip Nolan, who after participating in Aaron Burr's abortive efforts to establish an independent government is placed on trial for treason. During the proceedings, a flustered Nolan exclaims, "Damn the United States! I wish I may never hear of the United States again!" The judge solemnly grants Nolan his "wish," sentencing him to spend the rest of his life on a Navy vessel, where no one will ever be permitted to mention the United States in his presence, and from which he will never be allowed to return to his native soil. Thus is Nolan's fate sealed for the next 60 years -- yet somehow, the prisoner's innate patriotism and love for the land of his birth is never completely extinguished. Capped by one of the most moving deathbed scenes in all American literature, The Man Without a Country was filmed on location in Connecticut, Rhode Island, and Niagara, NY.