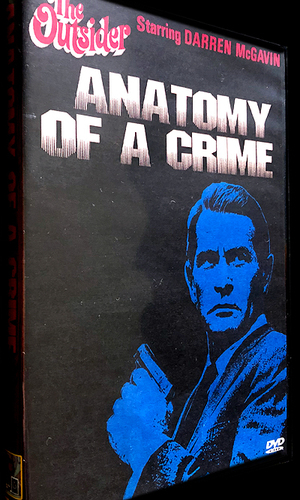 Anatomy of a Crime is comprised of two episodes from the 1968-69 TV series The Outsider. Darren McGavin earns top billing as David Ross, an ex-cop who became a private eye after cooling his heels in prison on a trumped-up murder charge. Ever on the outside looking in, Ross only accepts cases from other "outsiders" who've been wronged by society. Most of the footage in Anatomy of a Crime consists of the 60-minute Outsider episode "There Was a Little Girl", wherein a young woman claims to be the kidnapped-in-infancy daughter of a wealthy industrialist. Joan Blondell, Simon Scott, and Dorothy Green do guest-star duty in this 1968 installment. Woven into the continuity of "There Was a Little Girl" are scenes from another 1968 episode, "Tell It Like It Was...and You're Dead." Marilyn Maxwell, Whitney Blake, Jackie Coogan, and Ted Knight play major roles in this story of an ex-burlesque queen who receives death threats after announcing plans to write a tell-all autobiography.